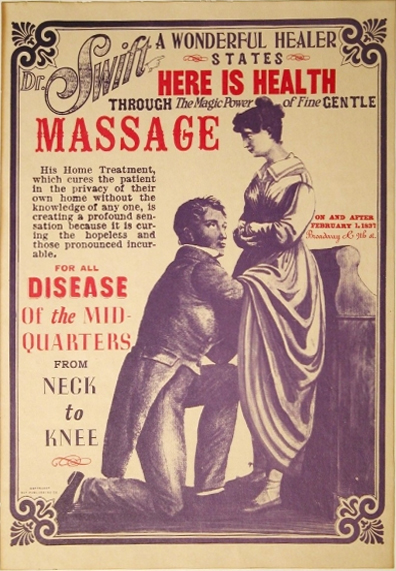 Vibrators and the Victorians

(Doesn’t that sound like a good book title…I’m so tempted honestly.)

So, I was reading up on something the other day, and before I knew it I was researching dozens of articles on it, since I really doubt I’ll be using it in a book I thought I might as well share with you here.  This post isn’t really kinky and is more informative than especially naughty.

That women enjoyed sex used to be common knowledge, but then things happened. The world changed and somehow it became inappropriate for centuries for women to actually want to get busy. So during Victorian times  a lot of men in America and certain parts of Europe didn’t believe women actually experienced sexual pleasure (hahaha!). Women were just supposed to endure sex for the joy of popping out babies and to please their husbands.

Since it was basically a license to be selfish and use the women like receptacles this was probably popular with some men and it’s not like women had many options then.

And women were trained to believe this too (Close your eyes and think about England, dear. It will be over soon. Once you have a baby in your arms it will all be worth it.) so they weren’t expecting anything better. Needless to say, this led to some frustrated women, who didn’t know why they were frustrated. One diagnosis for this was ‘Hysteria’. The word Hysterectomy comes from the same root word because they believed that uncontrollable emotion came from the uterus. Hence, without one, women would be calm and relaxed.

Anyway! Doctors would advise hysterical women to get more sex from their husbands. That didn’t work since most women need external stimulation and if they were getting that from the old man they wouldn’t be there, so more sex didn’t help. Single women were advised to go horseback riding… cause…you know. Giddy-up!

Oddly enough it seemed to cure the hysteria! It cured it so well that the women came back a lot and told their friends. By the 19th century doctors found themselves spending so much time doing this that they were developing the Victorian version of carpel tunnel and such, at least that’s the story. It was seriously exhausting, one woman after another. Until… someone realized they could make a machine to do it.

To be fair I have to present both sides and say some Victorian scholars deny that the first vibrators were invented for sexual manipulation. They say they were just for massage and that Victorians weren’t the prudes that we think they were, so women didn’t need them  just to get orgasms. I’m willing to buy that, but if the Internet has taught us anything it’s this: No matter how innocent an item, someone, somewhere, will turn it sexual. *Cough* That’s how we ended up with Rule 34!

I’d say women with a happy sex life during those times were probably not seeing the doctor for this sure, but more than a few others must have because I’ve actually seen several genuine Victorian ads selling them for a number of reasons including hysteria. 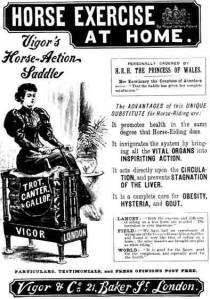 For women it went a bit differently. You can see that exercise is mentioned here, but also Hysteria, which we’ve already mentioned as being directly connected to the womb and being too emotional. I think you can draw your own conclusions. But there you go, vibrators are necessary for your mental and physical health.

Have fun. Be safe.

Vibrators were Sold in the Sears & Roebuck Catalogue

2 Replies to “Vibrators and the Victorians”