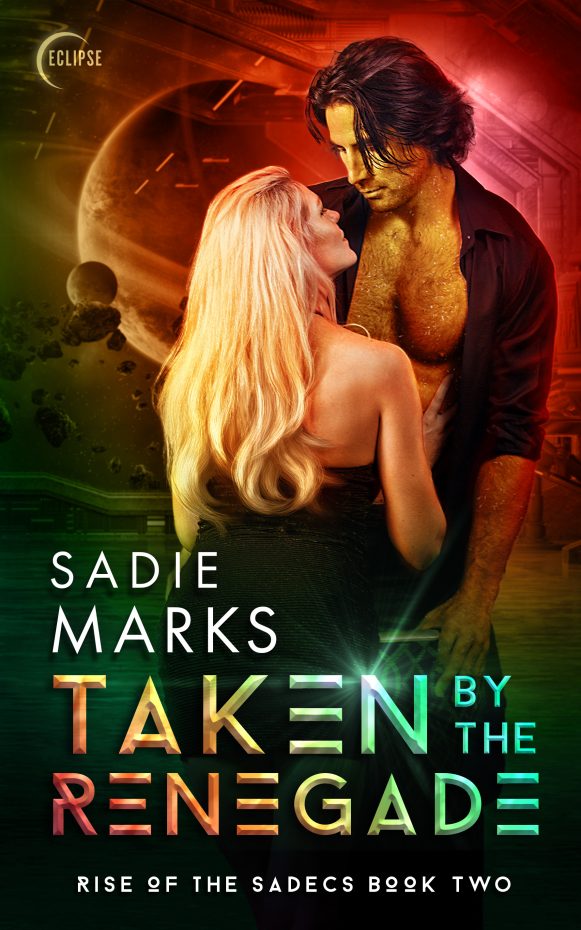 I am so excited and I have lots of news to share with you! First of all, as you can see, I just got the cover to my latest book under Sadie Marks and it’s fantastic! I love it so much and I hope you do too.  You guys are getting the very first peek before I start promoting it.

My final bit of news is that the e-book for Taken By The Renegade is already up for pre-order now in case you want to snatch it up. In about a week a paperback edition will be added for pre-order to the same link, both will be released around April 24th, depending on how slow Amazon is.

Taken is a sequel to Surrendering but it’s a stand-alone, which means you can read it even if you haven’t read the first one. I think they work nicely as companions.

You can find it here: Taken By the Renegade

The darkness added an exciting element of anxiousness to things, but she just found being tied down frustrating. They seemed to be exploring every inch of her and she wanted to explore them as well. She wanted to touch them back, wanted to drag her tongue over that beautiful skin, but all she could do was writhe while they played with their new toy.

It was a subtle kind of pain and never quite enough to quench her thirst or make her climax. It left her breathless and needy instead, but when she demanded more, a hand lightly settled over her mouth. “Quiet, slave, or we’ll have to punish you.” It was Nikon who said it, she thought, but with the blindfold on, she couldn’t be sure.

She didn’t know what the punishment would consist of, but she’d learned that no matter how much of a masochist she was, Sadecs would always find ways when they wanted to make a point. Her days of saying, “Go ahead!” with a laugh were in the past now. Or at least it was something she only did on purpose when she really wanted to push, and she wasn’t ready to do that with her new Masters quite yet.

Steamy enough for you?

I’ve been a little swamped for time with this book in release production, and two others being written, but I’ve also been working on a few relationship articles for here. I hope to get one out in the next couple of weeks, but I’m not sure which one will be finished first so I guess it will be a surprise for all of us.

I’m going to wrap this up here but remember to stay safe and healthy at home everyone. I’ve already got a few friends in the hospital with this virus and I don’t want to lose any of you. Curl up with a good book, and wait it out until we flatten the curve!