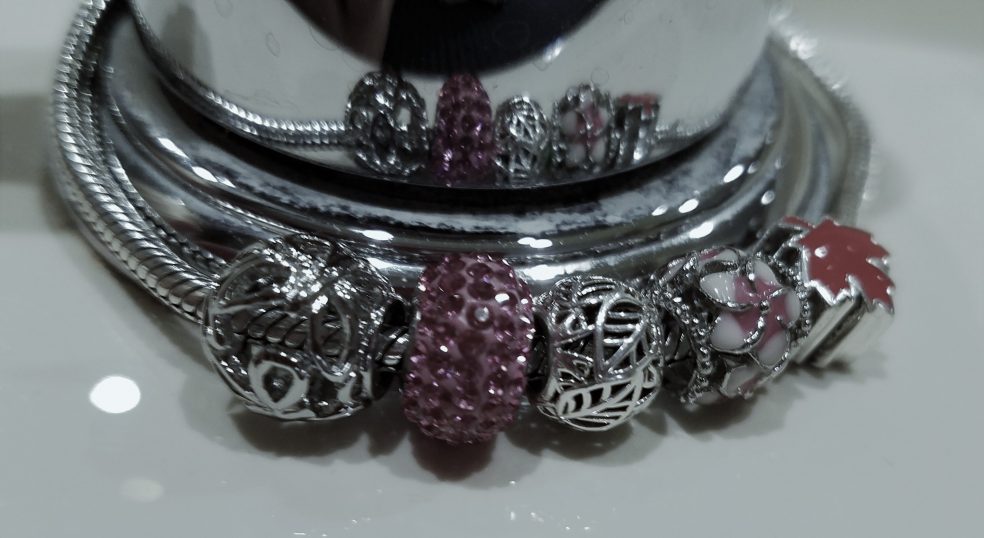 This article is continued from Part One

People who are new to D/s often struggle with what kind of rules to incorporate in their relationship, if any. In the first section of this article we talked about daily rules and why we use them. Whether or not you want to have them is going to depend on the kind of relationship you have, but I do think small things like this are really important.

END_OF_DOCUMENT_TOKEN_TO_BE_REPLACED

I realized while writing this that it was running a bit long, so I’ve decided to break it in half. My normal readers should be used to that. For anyone new to the blog… sorry, but I often have a lot to say when I’m talking about relationship dynamics.

And one quick announcement for you since I just got some news: Taken By the Renegade has been accepted by my publisher. I won’t have a release date for a while yet but I expect we’re looking at around March. END_OF_DOCUMENT_TOKEN_TO_BE_REPLACED

The new year seems like a good time for some serious topics and this is a deep one because it’s about slavery.  It’s something that I’ve been wanting to write for a few months now but it took a while to get the words together.

END_OF_DOCUMENT_TOKEN_TO_BE_REPLACED

Some of you may know what a Loopy Johnny is because it’s rather famous in the kink community. It’s a brilliant implement, both severe and almost silent which means those of you who have to be wary of making too much noise will love this. It also leaves some really beautiful loop shaped marks. I totally advocate picking up the real thing if you’ve got the bucks. They are beautiful, durable, very easy to stick in your pocket to carry anywhere and I’ve had mine for years without any problems.

You can find it here: https://www.aswgt.com/loopy.html
and no, despite my glowing review I’m not getting any kickbacks. I just really like this store and this toy. Directly below you’ll see a real loopy. It’s the sleeker one on the bottom made of rubber. The thicker blue one above it in the same picture is very similar in design but instead of rubber the loops are made of a stretchy bungie type cord. It’s also effective though slightly less severe, but I bought it years ago in a store so I’m not sure where you could get one.

It does give you some other ideas to play with though. Bungie cord is also cheap and fun to make DIY toys with. In fact I believe I’ve made some nice stingy floggers by pulling off the cloth outside of a bungie cord. Inside are usually tons of thin rubber strings and you can gather up several cords to make one flogger. 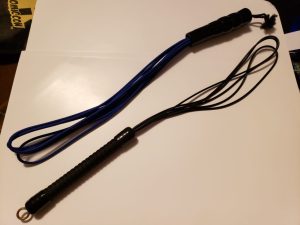 Now for those of you who are short on money and don’t mind a little DIY you can make your own version of a loop-type toy at home for a couple of bucks, and I’m happy to show you how. It won’t be as pretty and it won’t be nearly as durable but it will do the job and for the price of the supplies you can usually make at least two of them, sometimes three.

So what you’re going to need to do is go to the hardware store. Walmart might work also depending on how big yours is. You want to head to the screen section and you’re going to be looking for a package of window spline. Now, not that it matters, but this is what people use to fix broken screens, or make their own screens sometimes. It’s basically just a long piece of rubber cord that you use to hold the screen in by jamming it into the hollow inside the frame. But this simple household product can also produce a really nice kinky toy. 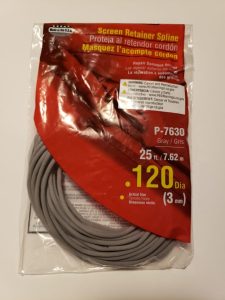 You’re going to open the package and you’re going to make three loops. In the end you will want them to be about a foot long. You can absolutely experiment with this though. I know people who have made much shorter or longer versions depending on where they intend to use them on the body. Small ones are great for breasts, for instance. If you want it to be similar to the original though you are aiming for about 11.5 inches for the final loop size.

But first when you make three loops of the same size with the spline  you are going to make them a little longer than that so you have some handle. I’d go for about 14 inches which will leave you about 2 inches to hold in your hand,  but I have small hands so feel free to make your handle longer for comfort.

Now you need to decide what you want to do for a handle. Some people use electrical tape and just wrap it around the end to hold it all in and don’t do anything else. That looks fine and will be pretty sturdy, but I like a handle with a bit more substance so even if you’re going to do tape in the end I’d wait until we get through the next part.

Now the problem with tape is you end up with stickiness if you decide to take it apart and redo it later. Since I may need to remake these I’m not going to use tape. So, I literally just use more of the spline, wrap it around about 2-3 inches near the end of the loops to make a good solid handle. Stop before you get to the end and leave some loop exposed there for hanging the toy. At this point, before you cut it the spline, you want to test it and see if it’s the length you want. Remember the old measure twice cut once saying? Yeah, that!

So now you have wound some small tight loops around to form the handle, and you’ve got some leftover spline sticking off. That is going to be tucked DOWN inside from the TOP of the handle–where they connect to the big spanking loops. Just feed it in the top and pull it out the bottom, being careful to hold onto it so the handle doesn’t unravel. 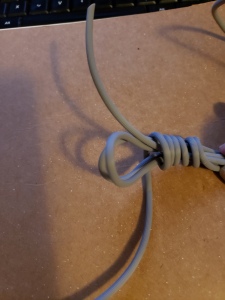 Now you can pull what’s left out to the side and tie a knot with the other end, which you haven’t cut yet. This is just so you have the basic tool and you can swing it around and practice it without worrying about it falling apart. It’s going to look like this if you’ve done a 2inch-ish handle like I have:

You might be able to see I still haven’t cut yet. I’ve just tied the knot and left a long tail hanging to the floor while I test it. If you’re going to leave it like this then that’s perfectly fine too. Once you’re sure you have it how you want it just cut the excess spline and you’re done. You can always make it smaller later but you can’t make it bigger once you cut.

There are slightly harder ways to do this that give you a better toy and I encourage you to play around with it until you’re happy with how it looks and feels in your hand. You can add more loops if you don’t like just three and have enough spline. I even know some people who dip the handle end into liquid latex for a nice professional look. If you do the handle the way I did you should end up with small loops at the end for hanging it like I’ve done. Those make it sturdier too.

If you wind for the handle you’ll be using more spline per toy so you may want to factor that in if you’re trying to make multiples from one package. It’s honestly not hard once you have the spline in your hand and I’m sure you could figure it out without the pictures but I know some people do better with visuals and the measurements help also.

So once you have it how you want it you can cut off the excess spline. If you are leaving the knot to hold it together then just leave about a half inch from the knot when you cut it so it doesn’t come undone. Now if you want to wrap electrical tape I recommend doing it over the handle you just made because it ends up looking nicer and feeling like a more solid handle. So just start at the far end from the knot as you wrap the tape, and then unknot it and trim the excess as you reach it with the tape because you don’t want the lump of the knot underneath. 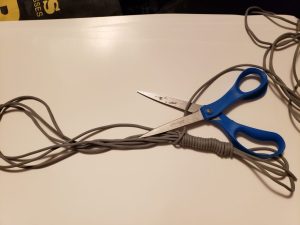 Now this is just to give you an idea of length in case you don’t have a measuring tape handy. The size I went for, which is the same as the real deal, is just about the exact length of a full computer keyboard as shown here when it’s stretched out. (Please ignore my keyboard animal friends. They live there to keep me company while I write.)

I made this in about 10 minutes, and it only took that long because I kept stopping to take pictures.  The material cost 5$ and I have enough left to make another full size one, and then maybe a small one about a third of the size.

The toy is about as silent as a switch if not more so, and really can’t be heard through closed doors clearly. At most it’s going to sound like a very soft fan.  But it does sting a lot so the sub/bottom may not be nearly as quiet!

I hope this was clear and understandable. It can sometimes be really hard to explain something like this and have it make sense. If you have any questions I’ll try to answer them!

So, if you’ve been following my blog for a while you know that I don’t do many book review posts. In general, this blog is more about D/s relationships than it is about promoting other books in the genre. And I think there are enough blogs out there that cover book reviews without me feeling the need to jump on the bandwagon often, but this is something I think some of my readers might be interested in, especially if you were following my long-distance relationship series. END_OF_DOCUMENT_TOKEN_TO_BE_REPLACED