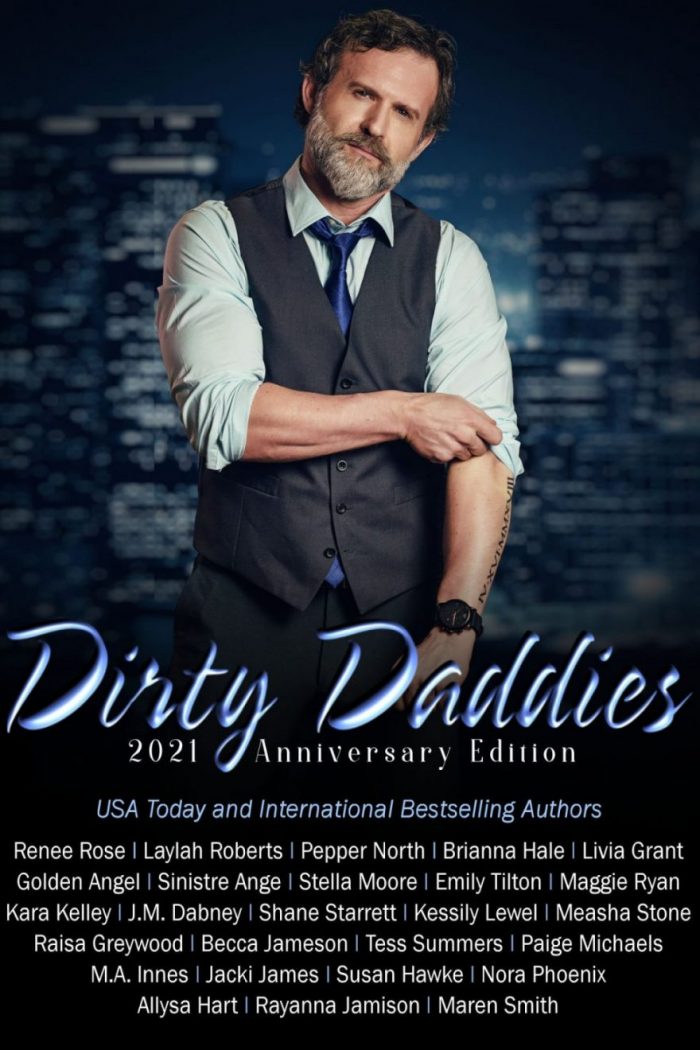 So we are in the home stretch now for the Dirty Daddies 2021 anthology and I’m so excited. Seriously, you have no idea. I’m also really nervous! And I have a favor to ask of you.

Please help if you can.

If you like Daddy stories, or like my work, or just want to support my work then please grab a copy of this anthology. We especially need Nook and iBook sales. This link should give you the option of all three: books2read.com/DirtyDaddies2021

It’s currently $2.99 but will go up significantly after it goes live, because it’s a big book with 25 stories in it. So you have a chance to get a very deep discount, possibly discover a new author you love, and help us out big time.

So why is this so important?

Well, we’re making an attempt at the USA Today Bestseller list. That’s not easy to do. For an indie author it’s almost impossible, even in an anthology.

It’s been a big investment, and taken a lot of my time the past couple of months. The book goes lives on September 28th. So there’s not much time left to get us where we need to be.

For those that don’t know, making the list requires at least 6000 sales in one week’s time. And at least 500 of them have to be off Amazon (Barnes and Noble, iBooks) and we’re close to being on target for the Amazon sales. However … a technical glitch has really hurt as at Barnes and Nobles.

For some reason our book hasn’t been searchable there. That means that the only sales we’ve gotten have been from people who got the link from us directly. That makes word of mouth so much more important this time– hence this post.

We’re trying to get it fixed but so far have had no luck. B&N doesn’t have a large dedicated staff for dealing with these issues the way Amazon does so we might be stuck with things the way they are.

The anthology will be available for 3 months–and then gone forever. But right now in the pre-order stage is the most important for sales since they all get counted the second the book goes live. After that we have just under a week to get the rest we need before the list is announced.

There is an incredible group of kinky authors in this anthology, some of my personal favorites, in fact. So, it’s well worth the normal price it will be after release. The sale price right now is just a super steal to be honest.

Okay enough begging! Now let’s talk about my story in the anthology. It’s called Home With Daddy and is from my Action Daddy series. Mitch is taking Olivia home to meet his family and she’s incredible anxious about it going well.

Here’s a little teaser for you.

Olivia was used to getting up before the sun rose. Her body was too set in that habit to sleep in very often. Mitch apparently didn’t have that problem and was snoring softly into the pillow as she slid out of bed. She did her best to be quiet, grabbing her clothes and heading for the shower with as little noise as possible.

Downstairs she could hear a distant clatter and banging. The smell of frying bacon made her stomach rumble, even though she rarely ate in the mornings. She ignored it and proceeded to the bathroom for her shower.

She hadn’t been in there more than five minutes when there was a soft knock and the door opened. Before she could panic, she heard Mitch’s voice, “Olivia?”

Of course, no one else would just walk in. She relaxed and tugged back the curtain to peek out. “Did I wake you? I tried to be quiet.”

His hair was ruffled, standing straight up in spots. His jaw was covered in salt and pepper scruff that wanted shaving. He yawned. “Not you, breakfast. Not sure how I’m so hungry when I must have eaten half a cow last night.”

She laughed. “Same. I was so stuffed but the minute I smelled bacon…”

“It’s nature. I’m always hungrier here.” He closed the door behind him and a second later had joined her in the shower.

When she started to protest that someone might hear, he covered her mouth with his. It was the most effective gag, and it worked every time. The nervous fear of getting caught drained away and she found herself pressing up against his morning hardness.

The gentle (mostly) lovemaking the night before had been just what she needed to wind down and sleep. This was more frenzied, passionate. She couldn’t stop the soft little moans and cries that trickled from her mouth as he pressed her against the wall and spread her legs.

All concern about being heard went out the window. Mitch had to cover her mouth with his hand when his hard length began to push its way inside of her. The water made her tighter and he had to work for it.

It felt fantastic. “Yes, Daddy. Yes, right now. Please … oh—” The rest was muffled against his palm, and he laughed at her inhibition.

“Mine, little girl. You are all mine.” The words were so low they were almost a growl.

There was no almost a minute later when they were interrupted by a sudden banging at the door. He flat out snarled, “What?”

“Hey, Ma says to tell you breakfast is on the table,” his sister called.

Mitch pitched his voice low so it wouldn’t be heard through the door. “Ignore her, we can eat later.”

But Jenny continued with, “Also, they are taking all the kids on a hike for a picnic after chores, so she thought you might want to see Emma before they go.”

“We’ll be right down!” Olivia immediately started trying to pull away from him and he groaned.

She half-expected the wet slap that landed across her ass, but it still startled a gasp from her. “Daddy!”

From outside the door came a snorting laugh that made it clear his sister had heard. Olivia wanted to melt through the ground with mortification.

“Well, I’ll leave you two kids to uh … dry off then,” Jenny said. There was another laugh and then the old wood floor creaked as she headed back downstairs.

“Well.” For a second, she couldn’t speak; the embarrassment was that thick. Olivia let her forehead thump against the cold tiles. “I’m never leaving this bathroom. Ever.”

Mitch snorted and drew out of her with a slowness that showed his reluctance. It drove her to the edge, and she couldn’t help the frustrated whine that escaped when he released her too soon to hit her climax. Knowing he was similarly unsatiated really didn’t help.

“Afraid becoming a bathroom hermit isn’t an option. And if you let her know it bothers you, she’ll tease you about it nonstop.”

He knew more about sisters than she did, so she had to accept the truth of it. Hiding that she was embarrassed wasn’t going to be easy though.