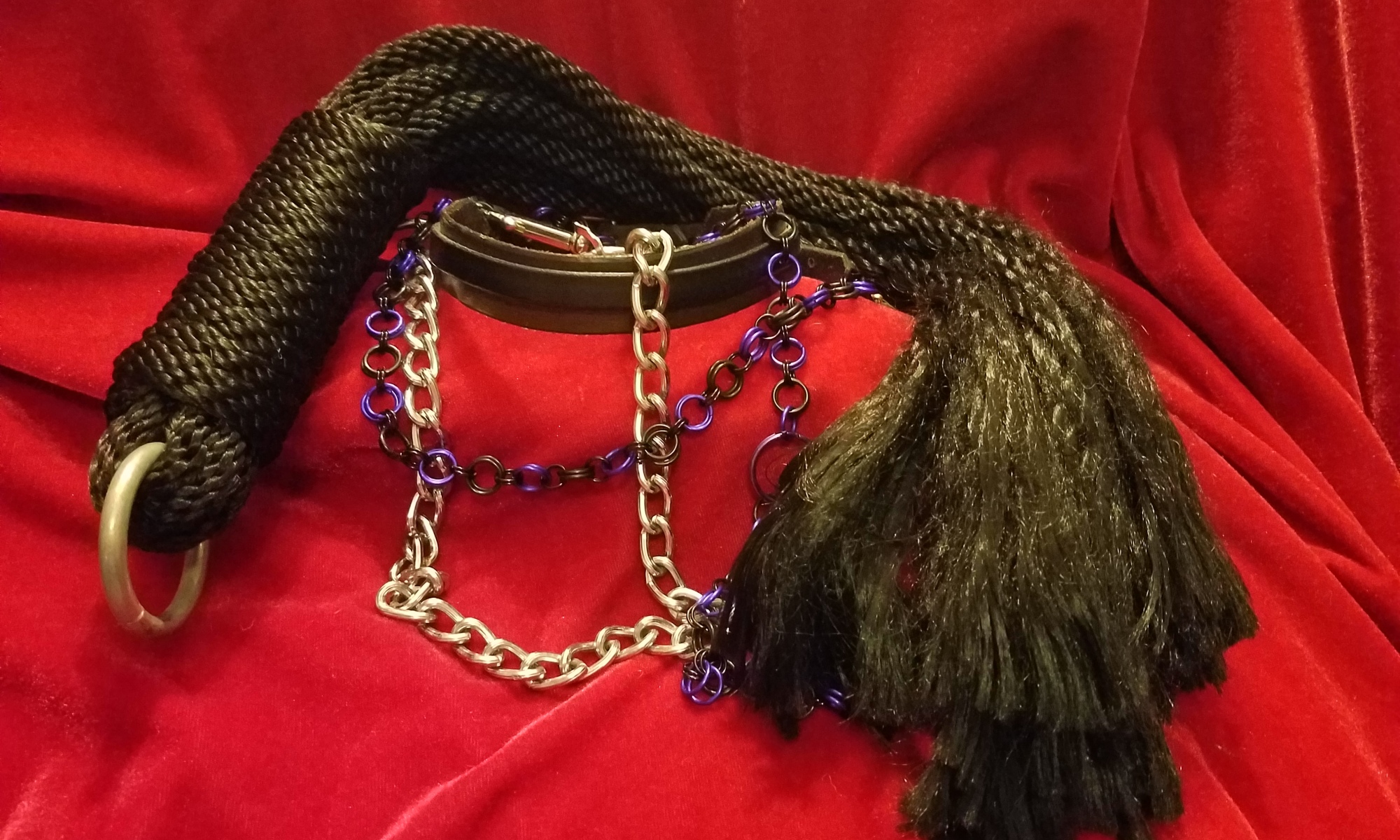 Maybe this is a secret. Maybe I haven’t mentioned this before. I honestly can’t say for sure. I don’t remember if it’s ever come up.

I hate the word Domme. It makes me grit my teeth.

Do I hate female Dominants? Oh no no, I adore them. I love to be topped by them. In some scenes, especially sexy ones, it can feel like a very different experience than being topped by a male Dom.

It isn’t true in all cases, but often your own sex is more intuitive about how certain things will affect you. They know from their own body what you might find exciting or what you might hate. It’s a matter of experience rather than something ingrained because of what gender they identify with.

Quick note here: Gender is a societal construct. Sex is what genitals you have. To oversimplify it, if you have a penis/vagina, you have probably played with it a lot. Therefore, will know what kinds of things are fun to do with it. And also, what is painful or uncomfortable.

This is very different from assigning stereotypical personality attributes to someone just because they are a certain gender or sex. That’s a flaw in our society because too many people don’t fit those molds.

It’s a myth that all women are naturally nurturing. Some of the most hardcore sadists I know are women. And some of the most nurturing Doms I know are men. Gender makes no difference in what someone likes, or in how hard or soft they are as a Dominant.

So why on earth would we need to separate people doing the same job and give them different titles? Who knows, but people keep doing it. At least most gendered titles are from way back though. They were invented when roles were much more rigidly defined.

The word Domme doesn’t have that excuse. It only appeared around 1999. And I cannot confirm this, but I was told by an old-timer in the scene that it was originally used to indicate Dominatrixes. They wanted a way to separate out the Pro-Dominants from the regular players.

If it’s true, that makes using the term for Doms who don’t do it professionally even more inappropriate. But somehow it became common. At first you just heard it around now and then. Suddenly it was everywhere.

What brought it to mind today was that I saw someone lecturing a guy on Facebook that the proper word for female Doms was Domme and he couldn’t just say Dom because it was disrespectful. Mind you, she wasn’t one herself. She wasn’t instructing him on what to call her, but that all women who are Doms had to be called Dommes.

I hate the term Domme and I’m not the only one either. Many female Doms hate it and there are other titles out there besides Dom or Domme that women might prefer to use. If they prefer something that says they are a woman there are lots of options: Lady, Goddess, Miss, Ma’am, or Mistress.

And no, those terms don’t bother me even though they are also gendered. They are long standing words with their own definitions, not new and not invented to separate women out. They also don’t have other baggage attached which I’ll get into in a second.

Despite its current popularity a lot of women in the scene just don’t care for the word Domme. There are several reasons, and I think for many of them it’s a respect issue. Personally, my main problem with it, is that it’s completely unnecessary and a little silly.

In my opinion the term doesn’t need to be gendered. A Dominant person is a Dom. That’s all that’s needed. They took that word and added extra letters to the end.

We are, as a society, trying to move away from gendering things unnecessarily and this is an example. I feel it separates female Dominants out, puts them into a different class. Women Tops in general often don’t get the respect they deserve, and I don’t think this helps at all.

In addition, the word Domme means naïve, innocent in German. It means cow in Dutch too and if you think that doesn’t lead to confusion with foreign language speakers, you’d be wrong.

It makes for such funny jokes at the women’s expense too. There are plenty of people in the scene who are happy to put a female Dominant down by pointing out these meanings. Sometimes they are truly just joking or trying to get punished (brats). Other times they are being disrespectful on purpose.

My biggest issue with the word Domme is that it’s not just spelled different. According to the dictionary the word Domme should be said exactly the same as Dom, which makes sense if it came from Pro-Domme originally, right?

And I would be fine with that. A couple of extra letters wouldn’t be a big deal. You wouldn’t even know they were there when using the word verbally anyway. But someone, at some point, felt they had to give it a different pronunciation as well. ‘Dom-may’ is often how it’s pronounced now.

I don’t know who started it but I bet it started down south. Have you heard what they call Target? Tar-jay. Same thing!

You might also notice it sounds very similar to dummy– the brats certainly did. Cue more hilarity as they jokingly refer to the women Tops as dummy all night long trying to get punished.

But at least the brats are doing it in a scene context. Brats act up and misbehave to get punished so when they are disrespectful like that it’s for a reason and most Lady Doms do understand that. They may not like it, but they understand where it’s coming from.

But certain male Doms also use the pronunciation to mock them and there’s no excuse for that. You know the type… the men who think a female Dom is just waiting for the right man to come by so she can sink to her knees for him. Those guys who think all women are meant to be subs.

They are the same ones who assume any woman they see in a club is a sub, will ignore all the evidence otherwise, and try to top them. I hear there is less of that these days, which is great, but there are still some men out there who insist on believing gender controls dominance levels.

It’s bullshit of course, and anyone smart knows that. But by separating out the women with the different spelling and different pronunciation we’re opening the door for that kind of hazing.

There is literally no reason to add the extra letters and give the word a flourish at the end when you speak it… except that it looks and sounds more feminine and girly.

I do kind of understand it in text. In books when you have a gaggle of Doms standing around and you’re trying to differentiate the characters it can make sense to use the different spelling. Even so I think there are better ways and I try not to use it much myself.

You may notice I rarely use Domme on the blog too, and this is why. I do slip now and then, because it’s so common that it gets in your head. But when I notice I change it.

In addition to the respect issue, I would like to point out that when you gender titles you make things harder for the people who don’t fit those genders. Yes, I know gender is a hot topic. I discuss a lot of controversial stuff here on my blog because those are the things that most need to be discussed usually.

Non-binary people exist. Dominant fits everyone. Dom is short for Dominant so that also works for everyone. Domme sections off a group of people needlessly and makes everything complicated.

And honestly … there’s just no reason for it. I’m hoping it eventually dies out for the same reason we now have flight attendants instead of stewardesses, and mail carriers instead of mailmen. Basically, when you have equality, you don’t need to make special girly titles for the women.

In general, we are moving towards a society that understands this.

But … just because some of us hate it, doesn’t mean everyone does. There are women in the scene who use it and have no issue with it. Mostly, I think, because they were told that was the term to use when they came in. People tend to hold onto the the things they first learn in a new situation.

So, all of that being said if your Female Dom tells you they prefer to be referred to as Domme then, obviously, that’s their decision. Dominants choose their own titles. I would never tell anyone they can’t pick how people refer to them.

But I think we should drop the assumption that Domme is the default title for women Tops, and we should definitely not instruct new people coming into the scene that it’s the only option. It’s not.

And please, let’s drop the ‘Dom-may’ pronunciation either way. When the word was first created it didn’t have a separate pronunciation. The dictionary says it’s pronounced Dom. It will cut down on the teasing jokes.

What do you think? Do you agree? Disagree? Feel free to hop into comments or email me with your opinions.

One Reply to “I Hate the Word Domme”