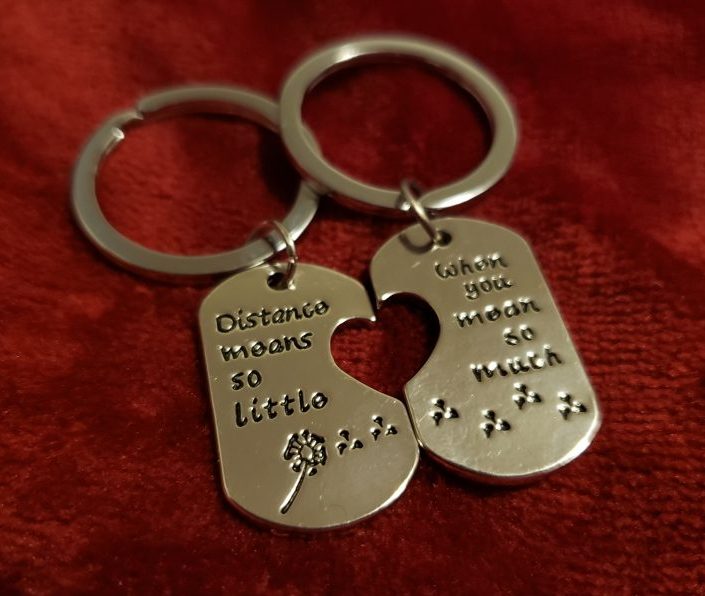 We had a pretty intense 3-part series on relationship stuff last month, so I think it’s time for something a little lighter. If you recall I wrote to you in April about the Survive LDR site which focuses on long-distance relationships.

They had contacted me because of my long-distance relationship posts, and thought I might be interested so I went over to check out their blog. There are some useful posts there, but they also offered me (and all my readers) a discount code for their store and I’m a fan of discounts so I decided to look at the store.

In case you are interested it’s here: Surviving LD  and don’t forget to use the discount if you order anything. It’s: kessily10

Anyway, I placed an order which came in about a month later. I promised to do a review of the items but they arrived after I’d posted the first part of that intense series and I didn’t want to interrupt it, so I put off posting this until now.

I have a D/s three-some dynamic with L and G and we’re LD so I was interested in a lot of their items. In particular they had some bracelet sets that looked really sweet. Since this store isn’t set up for relationships of more than two, we decided that I’d get two different sets and then I’d wear one bracelet from each set.

L and G each picked out which set they liked best, I believe there are four to choose from, and I sent each of them the other bracelet from the set they chose. I have to say I’m fairly happy with them. So, this is my honest review on the whole experience. By the way… my reviews are my own opinions. You can’t buy a 5-star from me.

First of all, ordering was simple and quick. No issues, picking out what we wanted took longer than placing the order did. Shipping took about a month, I believe, which is a little long for an item coming from inside the states—but mail in general has been slower lately and a month isn’t too bad anyway. The bracelets came in cute little mesh gift bags.

These bracelets are gorgeous. They are made out of real polished stones which I am a big fan of, and they are very attractive, but not feminine in any way so they are fine for men or women to wear, with a small caveat that I’ll get into in a second.

The first set we bought is onyx and tiger’s eye.  That was L’s choice. The other, G’s choice, is agate and howlite.  I love them all. Of the four bracelets we received I would be happy wearing any of them. And actually I would have been fine with the two sets we didn’t get as well, now that I see how pretty they are.

Since these aren’t just random couples’ bracelets but ones that are meant to symbolize the distance, each bracelet carries a single bead from the other bracelet in the set. So, the onyx set has one tiger’s eye bead on it. The agate bracelet has one howlite and so on. If you look close in the pictures I think you can see the odd bead on each bracelet.

I think it’s a clever idea, and I loved the symbolism.

They have a decent amount of stretch to them which makes putting them on easy and they snap back so they shouldn’t dangle too loose. I’d say they would fit most wrists. However, one of each bracelet set is smaller by about three beads. So, if you both have thicker wrists this could be a problem.

That’s a downside for me, to be honest. These sets are heteronormative and stone bracelets don’t need to be. As I said earlier, they only come in pairs, which is too bad, but not really a shock. The world is still adjusting to poly-groups. But there probably isn’t any real reason to make a pair of bracelets with one smaller for a ‘female’ wrist and it limits their customers on a product that could be worn by couples of any gender pairing.

I could see some couples having issues if they both have thicker wrists. The size difference just seems unnecessary to me with it being a stretchy band. So, I’d knock one star off for that and rate the bracelets at about a 4-star.

I also got a set of matching keychains in the order that are simple but cute. It’s the featured photo for this post but in case you can’t see it they say ‘Distance means so little’ on one and ‘When you mean so much’ on the other. When you put them together, they form a heart-shaped cut out. Since it’s really not a romance-specific item it will be good for friends who live far away as well and that’s what I bought it for.

All in all, I’d say I was pleased with my order. The price was reasonable, especially with the 10% discount code they gave us, and I got exactly what was pictured with no issues there. I will probably order from them again and I admit to being really intrigued by the long distance sex toys that are controlled by app.

If anyone gets them and wants to tell me about the experience I’d be down for that because I lllllllllllllove thinking about all the ways you could torture a sub with something like that. It’s an idea I’ve considered using in my books before but they are only just now getting to the point of working reliably so I’ve never experienced one.

And on that delicious note… I’m off to write! Busy busy!

Remember stay safe, stay healthy, and stay home as much as you can. I know some states are starting to open back up but the last thing we want is a second wave to put us all back in the red. So it’s worth taking things easy and not rushing out the door as soon as restrictions ease.